Cleanrooms and other controlled environments require stringent control of particles, residues and micro-organisms to ensure desired product or process outcomes. Each industry has its own critical parameters: ions and particles in electronics; microbes, endotoxins and particles in life sciences; fibres and silicone in automotive painting and graphics printing.

The control of these critical parameters is very often achieved by the use of wipes, either dry or pre-saturated. There is a huge range of wipes available to cleanroom users, manufactured from a wide variety of substrates, made with different manufacturing methods, finished with different surface treatments to enhance particle pick-up or increase sorbency, differing weights and size, level of cleanliness, and choice of impregnate. This is before we consider pack size, packaging or sterility.

Most users know exactly what they need the wipe to achieve, e.g. remove a disinfectant residue in an EU GMP Grade A zone without adding to the overall level of contamination, but it is less easy to identify which wipe provides the parameters they require.

Various studies have shown that wiping is a very effective way to control contamination on a hard surface. Initial work carried out by I F Stowers and H G Patton in 19781 looked at seven different surface cleaning techniques for removing contaminants from optical surfaces and concluded that wiping with a saturated lens tissue was the most effective particle removal process.

In a life science cleanroom, a key requirement is the removal of viable contamination usually using a wipe in combination with a fluid disinfectant. A study into the effectiveness of different methods of transfer disinfection using 70% alcohol solutions showed that wiping was more efficient than spraying alone, especially against spore contamination as alcohol is not effective against spores.2 When pre-contaminated objects were sprayed with 70% alcohol solution, only 27.6% reduction in spores was achieved – they were probably washed off the surface of the object. When using a wipe 80.6% of the spores were removed as the physical action of wiping both disturbs the biofilm on the surface and removes the spore into the substrate of the wipe.

To understand why wiping is such an efficient method of contamination removal it is worth having a very basic understanding of how particles attach to a surface. Studies of binding forces have shown that the predominant force between particles and the surface is a capillary force, caused by the formation of a thin layer of liquid between the particle and the surface.3 Tests on 1µm particles have shown that this capillary action is three times greater than the Van der Waals force, which is also acting on the particle.

But why is wiping such an efficient method of particle removal? It has been estimated that a modest downward force of 0.5kg on a cleanroom wipe translates into a 50kg force at the surface where it is acting to remove particles.4 At a microscopic level it can be seen that only the outermost fibres of the wipe are in contact with the surface to be cleaned and these fibres act like “micro-squeegies”, with all the downward force acting through these few fibres.

This mechanical action overcomes the various forces holding fine particles (including sub-micron particles) to the surface. Coupled with the fact that the structure of the wipe itself allows for entrapment of the particles and the subsequent physical removal of them from the surface, this explains why wiping is so effective. The ability of a wipe to trap particles varies according to the structure of the wipe and size of the contaminant.

Once the wipe is removed from the environment, the particles go with it, resulting in the most effective method for removing particles from a cleanroom surface. The amount of fluid used to pre-wet the wipe is critical as if the wipe is over saturated then particles are re-deposited on the surface and simply moved around, not picked up into the wipe.

However, a wipe can remove the contamination only if it comes into contact with it, so care must always be taken to ensure the wipe comes into consistent and intimate contact with all areas of the surface to be cleaned or disinfected. Unless carefully done, hand wiping can be quite variable and wiping tools such as isolator cleaning tools and mops reduce surface contact variability. Mouldings, door and window frames and seams all pose a challenge to good surface contact.

There are other benefits to using a wipe in a cleanroom environment. They are convenient and easy to use compared with other methods of cleaning. When used to apply disinfectants and detergents they reduce the environmental impact on the cleanroom itself as the application of potentially aggressive chemicals can be controlled. The use of pre-wetted wipes further increases the health and safety benefit by reducing the amount of airborne chemical in the cleanroom environment.

The characteristics of wipes affect their performance. There is always a compromise to be made between the different characteristics, and the decision of which wipe to choose for a particular application is risk-based according to the relative impact on a product or process:

Cleanliness: Every wipe will contain some contaminants, so it is important to minimise the deposition onto critical surfaces during wiping. Laundered, sealed-edge synthetic wipes are the cleanest available option; however, they are also less sorbent and more expensive than wipes made of natural fibres.

Sorbent properties are critical for the removal of liquids, especially when wiping to dry. Wipes containing natural fibres have better sorbent properties, however they tend to release higher levels of particulates and fibres. In general, synthetic wipes (polyester and polypropylene) tend to be more sorbent as the fibre size is reduced, with microfibre products being the most sorbent option.

Test results are usually available for intrinsic and extrinsic sorbency and rate of sorbtion.

Weight: Often expressed as g/m2, this variable has an effect on sorbent capacity and cost.

Non-Volatile Residues: NVRs are a measure of contamination that will not evaporate. It is a contaminant residue with indistinct dimensions and typically consists of hydrocarbons, silicones, dioctyl phthalates or other high molecular weight chemicals.

Non-volatile data is usually generated using both deionised water and isopropanol. Results are expressed in grams of extractables/m2, which is a useful guide to the relative purity of the wipe.

Metallic and other Ions: Semiconductor and data storage industries are very concerned about ion contamination from a wipe; for the most sensitive industries, wipes with individual ion levels below 1ppm are used. Knitted laundered polyester wipes are able to meet this criterion.

Sodium and chlorine are two of the ions of most concern. Ions are extracted in deionised water and quantitatively analysed by ion chromatography. Results are stated in parts per million (ppm). Ions are of little concern in a pharmaceutical or biotechnology environment.

Sterility and Endotoxins: For aseptic applications wipes are sterilised, usually by a validated gamma irradiation or autoclave procedure. EU GMP stipulates that all products used in Grade A and B environments should be sterile prior to use.

Sterile does not necessarily imply that the product is low in endotoxins and these must be tested and declared separately. The initial bioburden is generally lower for synthetic materials than for those containing natural fibres, and this is critical to achieve low endotoxin levels.

Chemical Compatibility: Pure synthetics such as polyester non-woven and knitted fabrics offer the greatest range of chemical compatibility, while those containing cellulose are susceptible to degradation by moderately caustic solutions. 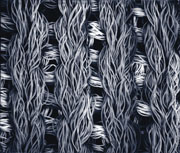 Wipes can be classified according to their cleanliness and physical characteristics, as described above. These characteristics are always determined by the following variables:

How the wipe is constructed: Knitted, non-woven (hydro-entangled, melt-blown, chemically bonded), woven. Binders may not be suitable for use in all environments.

How is it converted into wipes: Knife cut, or cut and sealed edges (laser, ultrasonic, thermal). 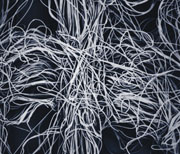 Sealed edges reduce the release of particles and fibres.

Whether it been treated or laundered: Laundering reduces all key contamination criteria; sorbtion enhancers and particle attraction treatments can be added during finishing.

Some key substrates and their electron micrographs are shown in Figures 2–6. The first (Fig.2) shows a no-run interlock knitted 100% polyester monofilament. A sealed-edge, laundered 100% knitted polyester is the cleanest wiping material available. The long monofilament means the structure is very strong and durable. An appropriate finishing treatment and laundering renders the material sorbent to aqueous solutions 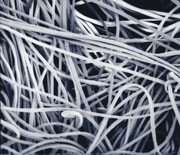 as well as solvents.

In Fig.3 a non-woven polyester/cellulose blended fabric creates a matrix that has good particle removal and entrapment properties. The cellulose element provides good sorption, however it also releases higher levels of particles and fibres.

The non-woven polyester material in Fig. 4 has good particle entrapment properties and yields low levels of fibres and particles. The short length fibres mean the fabric is not resistant to abrasive surfaces. A solvent or surfactant must be added to 100% aqueous solutions to facilitate sorption by the wipe.

In Fig.5, melt-blown polypropylene has a uniformly flat surface achieved with microfibre-sized filaments that give the fabric exceptional particle removal characteristics. The fine fibre structure also allows excellent sorbent capacity. When pre-saturated or used with a solvent, the fabric offers a uniform application, or “metered release”, of the solvents. Due to its hydrophobic nature the material needs treating to sorb 100% aqueous solutions.

The weave enables some particle entrapment, however the material sheds higher levels of particles and fibres.

Comparing wipes from different sources is an inexact science due to the variability between test methods and testing equipment. Wipes are typically tested for particles and fibres of specific sizes, non-volatile residues (NVRs) in different solvents, specific inorganic ions and sorbent capability, both volume and speed of liquid uptake.

Test methods for wipes have been designed by manufacturers and end users; however, the most commonly used internationally recognised standard test methods are those of the Institute of Environmental Sciences and Technology (IEST) – IEST-RP-CC004: Evaluating Wiping Materials Used In Cleanrooms and Other Controlled Environments.

The test methods for particles and fibres often vary considerably and the results even more so. The tests for residues and ionic contaminants are more established and repeatable. However, the only way to truly compare results for different wipes is if they have been tested to the same test method by the same lab.

The way wipes are presented has an effect on both ease of use and cost. Typical formats include: bulk, stack, bulk half fold and individual half fold, quarter fold, C-fold, W-fold or Z-fold. Smaller quantities of wipes per pack are usual in aseptic applications to ensure sterility and reduce waste, although proportionally the wipes become more expensive as the pack size is reduced.

Wipes that are available in a pre-saturated format are packaged in materials that are validated to be compatible with the solvent or disinfectant being used for the duration of the product’s recommended shelf life.

In conclusion, there is no such thing as a Class “X” or Grade “Y” wipe, as it all based on relative cleanliness and on specific performance requirements. A wipe that is suitable for use in a Class 3 semiconductor cleanroom may not be suitable for use in a Class 3 aero-space environment. Pharma cleanrooms have to factor in sterility and endotoxins, as well as particles. As can be seen from the characteristics, there may need to be a trade-off in terms of cleanliness, sorbency, particle entrapment, residue removal and budget. Invariably, the lower the number of particles and fibres the higher the cost of the wipe.

Identifying the least expensive wipe that meets the needs of each application can assist in controlling cost. For example, non-woven wipes tend to work well in less critical applications, bulk packaged knitted wipes tend to be less costly than flat packed wipes, and sterile products are mandated for use only in Grade A and B environments in pharma cleanrooms. Pre-saturated wipes will generally reduce costs relating to solvent use, process validation storage and health and safety.